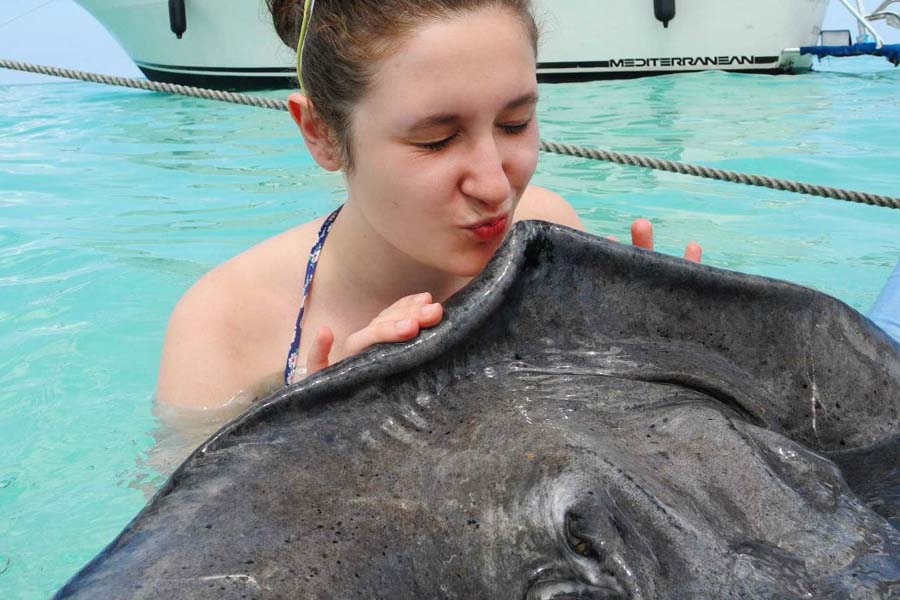 We continue to travel the tropical islands of the Caribbean Sea. Grand Cayman is the largest of the Cayman Islands, a British Overseas Territory in the Caribbean, some of the main tourist attractions include Stingray City, the Turtle Farm and the Seven Mile Beach.

Information You Should Know Before You Go

Cayman Islands is an overseas territory of Great Britain in the West Indies. Cayman Islands include 3 islands – Grand Cayman, Little Cayman and Cayman-Brack, with Georgetown on the Grand Cayman as the capital of Cayman Islands. The population of all the Islands is pretty small, about 52 thousand people, and 49% are migrant workers from Central American countries. English is the official language, you can tell that people here are very used to tourists and communicating with them.

The Cayman Islands were colonized from Jamaica by the British during the 18th and 19th centuries. Administered by Jamaica from 1863, they remained a British dependency after 1962 after Jamaica gained independence.

Head of State is a British monarch (since February 6, 1952 – Queen Elizabeth II 7), who appoints a Governor-General. We even got to see the governor’s house on the way to the Stingray city.

Some of the most unusual inhabitants of the island are the iguanas: that’s why the islands are called Cayman. They look like dragon-looking lizards and some of them can be quite large. They roam around the island and are more common than stray cats and dogs.

The Cayman Islands are characterized by a tropical climate, average temperature in winter is  70 F, and in the summer it can be up to 90 F.

A Day on the Grand Cayman Island

George Town is right on the bay and is a port of call for several big cruise ships. As we got off the cruise ship, we could tell that this Grand Cayman is very different from Jamaica. All of the buildings in Georgetown reminded me of Florida, and even the school buses looked similar to the ones in the United States. We took a guided bus tour to see and learn more about the Cayman Islands and its history. The Cayman Islands are one of the richest islands not only in the Caribbean but in the world. The Cayman Islands is the largest offshore zone, the size of the money turnover of this nation is the fifth in the world. Throughout the year the island is visited by more than 2 million tourists. First of all, they come to Cayman Islands for amazing beaches, diving and underwater hunting.

Georgetown has a small, historic downtown area with some attractions, shopping areas and restaurants within a few minutes walk from the port. If you don’t mind the sun, walking is a great way to get around Georgetown and the Seven Mile strip.

Where to Go In Grand Cayman

Perhaps the most thrilling spot in Grand Cayman is the Stingray City. This lively tourist spot is a string of sandbars located in the North where stingrays congregate. Tour operators bring people by the boatful they get to to pet and even kiss the stingrays.  Finding a ray that will slow down and let you pet it can be a bit of a challenge. These large sea animals drift through the water quickly. The stingrays live in the ocean and are technically wild animals, but they have become quite accustomed to people and they flock to the area looking for food from guides and visitors. In case you think stingrays sound dangerous, don’t worry. They do have a barb near the tail, but they aren’t going to use it on you.

Caption: Local legend has it that kissing a stingray brings seven years of good luck.

Another attraction on the island is the Cayman Turtle Farm. At the park visitors can watch sea turtles swimming in the pools and also get the chance to hold a baby sea turtle. The small turtles often flap their feet when they are picked up, and to calm them down you need to rub the turtles’ necks. Some turtles are bred to for the famous turtle soup to be sold locally while others are kept to be future breeders, and the luckiest turtles are released back into the ocean, promoting turtle conservation.

Turtles and stingrays aren’t the only creatures you’ll see in Grand Cayman. In fact, one of the first animals visitors may notice are the wild chickens. Chickens and roosters roam freely about the island because they have no natural predators on the island.

One of the main attractions is the Seven Mile Beach – a long stretch of white sand beach, calm turquoise waters, and luxury hotels. There are also shops and restaurants across the street. The beach itself is public and can be accessed through marked “public beach access” paths if you are not staying at one of the hotels.

Hell on the Grand Cayman

You may also go to Hell when you are visiting the Grand Cayman. It is a common tour stop and it consists of black volcanic rock formations. Honestly, it looks better on pictures and if you don’t have enough time, I would skip this stop all together. But if you go, you can get postcards postmarked with the Hell address, and there are a couple of gift shops selling Hell-themed souvenirs.

What to Eat on the Grand Cayman Island

Finding cheaper food on the Cayman islands can be a challenge as the cost of living is higher than most other countries. Most restaurants are expensive. Rackams is a local favorite on the island because of its free chicken wings on a Friday night.

If you are having lunch or dinner when on Cayman Islands, do try to branch out and try local specialties such as fish, turtle, and conch. While in Cayman ask your taxi driver or a local for their favorite local Jerk Stand (a MUST try) and don’t forget to try the Tortuga rum cakes, they are delicious.

Are you planning a trip or a cruise to Cayman islands? Leave me a note below, I would love to answer any questions you have!