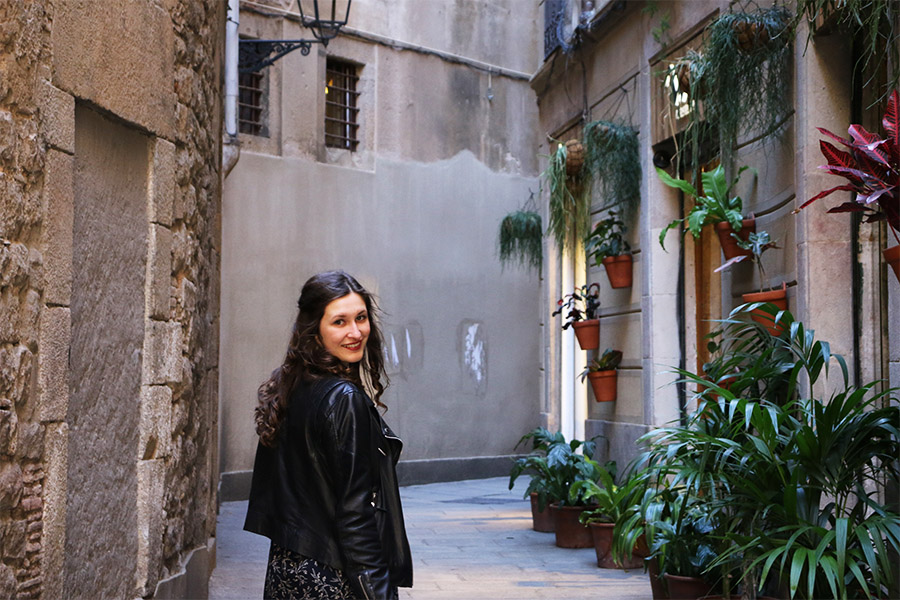 Where the History of Barcelona Lies

Gothic Quarter offers buildings dating from Roman times to the 20th century. The first human settlements in Barcelona date back to Neolithic times, however, the city itself was founded by the Romans at the end of the 1st century BC. The colony had about a thousand settlers and was bounded by a defensive wall, the remains of which you can still find in the old town.

For over 200 years, Barcelona was under Muslim rule, and, following the Christian reconquest, it became a county of the Carolingian Empire and one of the main residences of the court of the Crown of Aragon. The fruitful medieval period established Barcelona’s position as the economic and political center of the Western Mediterranean. The evidence of the splendor enjoyed by the city you can find in the Gothic Quarter. When exploring the Gothic Quarter, you can imagine as you’ve traveled several centuries back. This is the place to learn about Barcelona’s history and culture.

Where is the Gothic Quarter and How to Get There?

The Barrio Gòtico is a part of the Ciutat Vella (old town), along with La Ribera, La Raval, and Barceloneta districts of Barcelona. The Gothic Quarter is located in the area between La Rambla and Via Laietana, and from the seafront.

How to get to the Gothic Quarter: take the metro: Line 3, Liceu station or Line 4, Jaume I Station. Or, just start at Placa Catalunia for a nice walk.

Sightseeing in the Gothic Quarter

As you see, the Gothic Quarter is the best place to get immersed in the history of Barcelona, but this district is also the place where you can encounter Barcelona’s unique traditions and festivals, have a drink at artsy bars and cafes and go one a shopping spree!

A Walking Tour of the Gothic Quarter: Start at Plaça Reial

Plaça Reial is right next to La Rambla and is a well-known tourist destination. Start your tour at Plaça Reial, the royal square built in 1835 with a bohemian atmosphere. While you’re there, look at the two street lamps, surmounted by a winged helmet and a dragon, on both sides of the central fountain. These were some of the first things Antoni Gaudi designed as a young architect.

Barcelona Sightseeing Tip: The plaza also hosts many restaurants and some of the city’s most famous nightclubs, including Sidecar, Jamboree, and Karma. Make sure to come back at night!

Go up La Rambla and turn right onto Pla de la Bouqeria. Here you will see the Basílica de Santa Maria del Pi with a 54-meter high tower (which can be seen from La Rambla) and is one of the most incredible structures of the neighborhood. The gothic church is set on a beautiful square, with a grand rose window, and views from the bell tower.

Barcelona Sightseeing Tip: While you’re there, stop at La Pallaresa Xocolateria Xurreria for some hot chocolate and churros!

Take a walk from the square on the Carrer de La Palla. It’s ok if you get lost on the way, I still do! Eventually, you will get to the magical Felip Neri Square, which is another hidden gem in the Barcelona Gothic Quarter. This tiny square used to share space with a church and the city’s shoemakers’ and coppersmiths’ guilds. It is also one of the places in Barcelona where you can see the effects of the Spanish Civil War bombings. With the school, old church and small water fountain it is a place to visit not only because of the history but also because of its isolated feel. There is also a hotel with a bar, so a stop for 30 minutes is a must.

Walk to the Barcelona Cathedral

This is the heart of the Gothic Quarter and the main sight, the Cathedral of the Holy Cross and Saint Eulalia, also known as Barcelona Cathedral. Head down to the crypt to see the tomb of Saint Eulalia, the patron saint of Barcelona, who is said to have been brutally tortured and killed by the Romans for her faith. Built between the 13th and 15th centuries, inside you’ll find a beautiful cloister with a garden, complete with fountains where you can meet the cathedral’s 13 geese – one for every year Eulalia lived. It’s awe-inspiring interiors feature gargoyles carved into the roof, numerous chapels and a crucifix rumored to have helped defeat the Turks at the Battle of Lepanto.

Barcelona Sightseeing Tip: Make sure to cover your shoulders and wear modest clothes if you don’t want to be turned away at the door at the Barcelona Cathedral!

Explore the area around the Cathedral

Take a few steps away from the Cathedral in the opposite direction (staying on the square) and you will see “the Kiss” mural by a Catalan artist, Joan Fontcuberta. The kiss is composed of 4,000 small tiles, which are pictures donated by local residents that represent a ¨moment of freedom¨.

Museum of History of Barcelona

Overlooking the Plaça del Rei, a medieval courtyard thought to have been used by King Ferdinand and Queen Isabella to celebrate the return of Christopher Columbus from the Americas in the 15th century, you will see the City History Museum. When carrying out some renovation works in the 1930s, a whole network of Roman ruins was discovered underneath the heart of the old city. This museum is one of my favorites in the city: here you will witness 1st-6th century AD ruins. There’s no better way to get a sense of the layers upon layers of history of the Barrio Gotico!

The Bishop´s bridge in Barcelona (that you’ve probably seen on Instagram many times) hides a local legend. While you walk through under the bridge you can see a skull on the bottom of the bridge, which is supposed to bring you bad luck!

Stop at the Plaça Sant Jaume

Follow the Bisbe Irurita Street from the Cathedral to Sant Jaume Square, featuring the City Hall and the Palau de la Generalitat. Both institutions existed in medieval times and are still responsible for governing the lives of Catalans and the people of Barcelona.

The Plaça Sant Jaume is located at the place where the main streets of Roman Barcino met, the Cardus (now Carrer de la Llibreteria and Carrer Call), and the Decumanus (now Carrer Ciutat and Carrer del Bisbe). This was the Roman forum, the center of the Roman city where the Temple of Augustus once stood, the remains of which can still be admired in the Carrer Paradís.

See the Human Towers and Sardana Dancing in Plaça Jaume

The best time to catch the jaw-dropping phenomena of human castle-building—Castellers—is during the La Mercé Festival in late September. Watching bodies scramble to the tops of pyramids of arms and legs near the rooftops of Plaça Jaume’s neoclassical palaces is a wonder to behold. However, you will see it almost every week, at most festivals, weekends, or just a Castellers competition. Use this website to find the Castellers events near you!

Also, throughout the year you can catch Sardana dancing, every Sunday afternoon and on holidays as well. There is always something happening in Gothic Square!

When it first opened in 1897 on the famous Carrer de Montsió, Els Quatre Gats was a popular hangout of Barcelona’s very own Pablo Picasso, who hosted his first exhibition there in 1899. The building is decorated with colorful tiles, geometric brickwork, and wooden fittings.

It has a Bohemian atmosphere and was chosen by film director, Woody Allen, as one of the scenes for the shooting of his film  Vicky, Cristina, Barcelona.

El Bosc de les Fades means “fairy wood,” and this sangria-serving grotto just off the bottom end of Las Ramblas is decorated just like one. The bar is right next to the wax museum and quite hidden. At the cafe, you’ll find fake trees, illusory mirrors, haunting music, and simulated rainstorms that are all part of the fun experience.

Drinking Vermouth (or Vermut as the locals refer to it) is a local tradition in Barcelona! A fortified wine, it became a popular drink among the working classes during the Spanish Civil War. Be sure to ask for the vermut casero – the house version. The best house Vermouth around is made at El Refugi, a tiny bar run by a very welcoming couple tucked away just minutes from Las Ramblas.

Listen to live jazz at the Cozy Jamboree club

A visit to the Barcelona Gothic Quarter is nothing without a trip to Jamboree Jazz. Often lauded as the best jazz club in Spain, this atmospheric underground joint with brick walls and sloped ceilings has been graced by Ella Fitzgerald and Chet Baker. Snatch the opportunity to see world-class jazz musicians in an intimate setting, or head down on a Monday night to witness the completely improvised jam session with up-and-coming local talent.

As I said earlier, the Gothic Quarter is also my favorite place in Barcelona to shop. One of my favorite streets is Portal de l’Àngel, where you can find local Barcelona shops like Custo, Ivori, and Desigual, and also famous chains like Mango, Zara, H&M, and more.

Another street that I absolutely love is Carrer de Avinyo. My favorite shops are Urbana, a little spot featuring local artists and designers and Claudine Complements. Be sure to check them out when you’re exploring Barrio Gotico, the Avinyo street has lots of local shopping options!

The real beauty of the Gothic Quarter is in its interesting narrow streets and alleyways. There are so many little streets to wander around you may end up never taking the same route twice. You will feel like you’re in a labyrinth, soak it all in! Looking for more things to do in Barcelona? See the 10 Things You Absolutely Must Do in Barcelona!