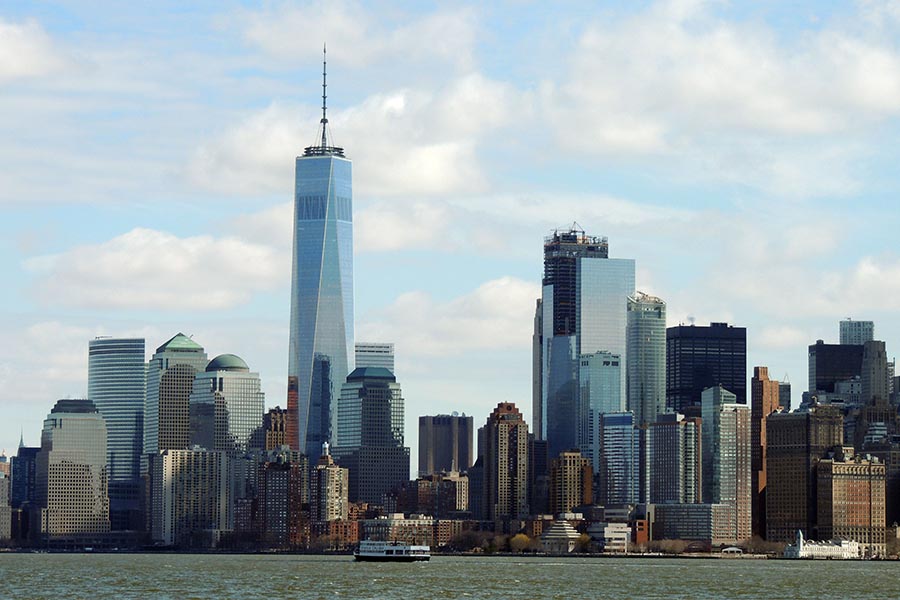 Lower Manhattan is a beautiful part of New York City, it is full of history, amazing architecture and culture. Spend your day strolling down the Exchange Alley or Liberty Street, seeing the Statue of Liberty or shopping. I hope you enjoy the historical sights and views of the lower Manhattan.

Lower Manhattan is located in the southern part of the island. This is the business center of the city. Here you will find the City Hall, the New York Stock Exchange – the center of the Financial District. Another famous part of Lower Manhattan – Little Italy, which went down in history by the names of famous mafia. In addition to the sights of the financial world, there are remains of the history of the beginning of the formation of the United States, such as the Federal Hall and the beautiful Gothic Trinity church. The best way to start your tour of the lower Manhattan is by having a coffee in one of the thousands of New York’s coffee shops and seeing the statue of Liberty.

Having Breakfast in Lower Manhattan

Some of my favorites breakfast spots in the Lower Manhattan are Le Pain Quotidien or Inatteso Cafe, just take a look at their breakfast menu. It’s not too expensive and it’s delicious!

Now that you have enough energy for a full day of exploring, head down to the Battery Park. It has a big significance for the New York history. The park has a beautiful waterfront with views of the New York Harbor including the Statue of Liberty and Ellis Island. Pay attention to “The Immigrants” monument. It represents their plight and hope as they take their first steps towards building their new life in America. This is a park where you can take a tour or a ferry to see the Statue of Liberty or the Ellis Island, which I highly recommend!

Of course, this is the main symbol not only of New York, but of all America. As a time-saving, budget-conscious alternative to visiting the Statue of Liberty, you can take a free ride on this commuter ferry. During the boat ride you get a good view of the Statue of liberty and Ellis Island and stunning views of the Lower Manhattan skyline. The ride there and back is about 50 minutes and you don’t need a ticket. The ferry runs frequently during the week and slightly less often on weekends.

You can also take a tour that will take you to the Statue of Liberty and the Ellis Island. To get inside, you need to swim by the ferry that departs from Battery Park every 15-20 minutes. The admission price for the Statue of Liberty Cruise is $18.50 for adults and you can purchase them here. It’s definitely worth the price and it will take you half a day just to see these sights!

Wall Street is one of the most famous streets in the United States and you shouldn’t miss it! Its name comes from the wall that was erected here by the Dutch in the mid-1600s to mark the northern boundary of their settlement. If you walk along the center of the cobblestone block of Wall Street between Broad and William Streets, you will see wooden plaques indicating where posts of the original wall used to stand.
There are two buildings that you have to see, and they are at the intersection of Wall and Broad Streets. On the northeast corner you will see Federal Hall National Memorial with George Washington’s statue in front of it. Here, the first American Congress met after America gained its independence and here George Washington sworn in as first president. The hall is open to the public free of charge. Inside the hall are exhibits that display early American artifacts as well as public bathrooms.

On the southwest corner is the New York Stock Exchange. You will recognize the NYSE by the American flags flying along the facade.

Here you will also be able to find the most bizarre symbols of the NYC – the statue of the “Charging Bull”. This 7,000-pound bronze sculpture was a gift from Italian sculptor Arturo Di Modica who created the bull in response to the 1987 stock market crash. According to the architect’s idea, the statue symbolizes the strength of the American people. This is one of the most photographed sculptures in New York City.

More shares are exchanged at the NYSE than at any other market in the world. The current location is a columned temple with a classical frieze on its pediment female figure, Integrity.

This is the third Trinity Church that stood on this place. The first one burned down during the Revolutionary War; the other was demolished in 1839 after storm damage. The churchyard cemetery, holds the graves of Alexander Hamilton, Hamilton’s wife Elizabeth Schuyler, Declaration of Independence signer Francis Lewis and early publisher William Bradford.
This church remains an active Episcopal parish with daily services, though many come here for tours to learn more about the architectural and historical elements of the church. It is one of the most beautiful building in the Lower Manhattan.

The name and inspiration for the original World Trade Center dates back to an exhibit at the 1939 World’s Fair. The new centerpiece of the rebuilt World Trade Center had “Freedom Tower” as its working title. This glassy tower marks the latest stage in the refashioning of Lower Manhattan’s skyline. Crowned by an observatory from which you can see a country mile, One World Trade Center is the tallest building in the Western Hemisphere.

If you want to honor the memory of those killed on September 11, go to the National September 11 Memorial & Museum, which is located on the site of the twin towers. More precisely, on the site of the destroyed buildings two unusual pools are now located and the museum itself is under them. The entrance costs $24 for adults and $15 for children. You can buy tickets or book a guided tour online. The plaza is large and airy and even during its busiest hours, there are places where one can find a quiet spot to contemplate. Unlike other memorials, the names are not listed alphabetically but rather grouped by affiliation – employees of companies. This memorial left me thinking for a full day about those who died that day. The plaza is open to the public from 7:30 am-9:00 pm daily.

Century 21 is the most popular shopping destinations for tourists and locals. Here you can shop for hours and find great sale prices on designer clothes and brands. It also has watches and jewelry, linens, luggage, handbags and a great shoe department for men and women. It’s the perfect place to pick up great souvenirs for your friends and family. Don’t forget, there are so many more places to spend hours shopping in NYC. If that floats your boat, check them out, too!

Brooklyn Bridge is one of the most famous bridges in New York, connecting the most important urban areas – Brooklyn and Manhattan. It is one of the oldest suspended bridges in the United States, until 1903 it was the longest bridge of its kind in the world. In addition, the Brooklyn Bridge is the first in the world, with the construction of which used steel cables. It’s a great destination for photos and for an afternoon stroll!

Tell Me: What are you favorite places in the lower Manhattan? Where do you like to go when you are in NYC?

Related: Things to do in NYC