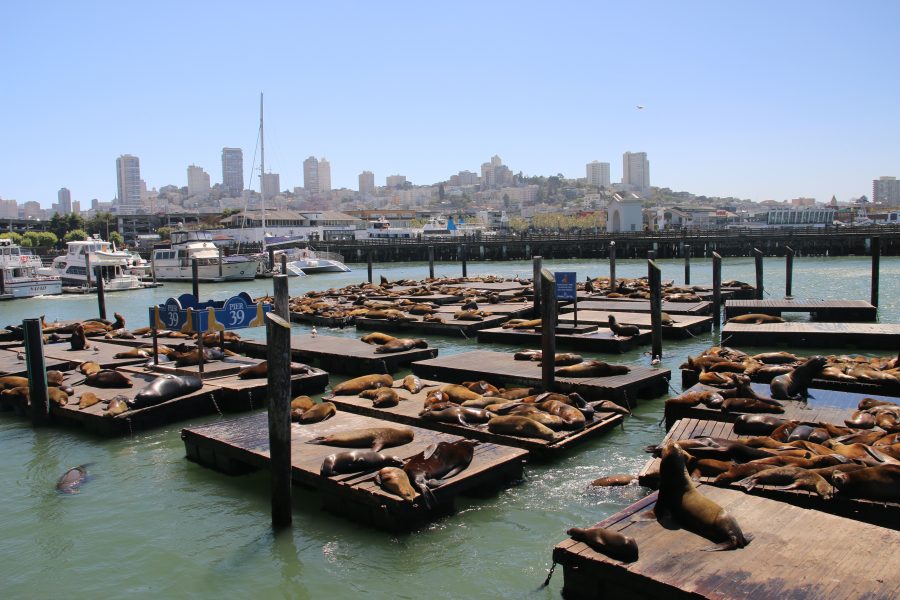 San Francisco is a cultural paradise, filled with art and inspiration at every corner. It’s the perfect vacation destination for couples or families with diverse interests, because there is something for everyone in the City by the Bay.

The Fisherman’s Wharf of today rests on land created from the buildings destroyed in the earthquake and fire of 1906. That’s why many of the well-known sights were developed only in the last few decades.

The original Meigg’s Wharf was once the main port of entry to San Francisco and an industrious place. Generations of fishermen made a living by catching fish and crab at the wharf. Today, as in the past, it is the fishing fleet that gives San Francisco Fisherman’s Wharf its authenticity and activity! Plus, you can still find the famous clam chowder in a bread bowl!

Things to Do at San Francisco Fisherman’s Wharf

Pier 39 is a must on your list when you visit Fisherman’s wharf, with sea lions, Aquarium of the Bay, waterfront dining, street performers, live music, shopping and more.

Related: Cool Neighborhoods to Visit When In San Francisco

Aquarium of the Bay

Animal lovers won’t want to miss this delightful aquarium with a specific focus on the marine life of the San Francisco Bay. Located in the very front of Pier 39, the Aquarium of the Bay, gives you a chance to look and interact with more than 20,000 local sea creatures. Your visit will take you through three main exhibit areas that display the amazing riches that lie beneath the surface of the San Francisco Bay and surrounding waters.

You will get to see creatures like Sevengill shark, moon jellies, and touch a bat ray’s wing. You will be able to walk through tunnels and watch San Francisco Bay’s most amazing animals swim overhead. Daily special events include animal feedings, naturalist presentations and behind-the-scenes tours. Recently there was also a new permanent addition to the Aquarium of the Bay family – three North American River Otters!

The Sea Lion Center at Pier 39

The sea lions camping out in PIER 39’s West Marina have been called, “Sea Lebrities.” The Sea Lion Center, operated and managed by Aquarium of the Bay includes interactive displays, educational videos and many fascinating presentations led by Aquarium of the Bay Naturalists. You can touch a sea lion pelt, size yourself up next to a real sea lion skeleton and more. Once you learn more about the California sea lions, step outside to the K-Dock and see them!

The sea lions started taking over the docks shortly after the 1989 Loma Prieta earthquake. At first they numbered from 10-50, but due to a plentiful herring supply, available dock space and the marina’s protected environment, the population grew to more than 300 within a few months. Each winter, the population can increase up to 900 sea lions, most of which are male. During the summer months, the sea lions migrate south for breeding season, but in recent years a small group stays at Pier 39 year-round.

Another fun experience perfect for the whole family is finding your way out of Magowan’s Infinite Mirror Maze! The maze offers infinite hallways, endless circles and dead-ends for just $5 per person.

The San Francisco Carousel, handcrafted in Italy, is hand-painted and depicts famous San Francisco landmarks, including the Golden Gate Bridge, Coit Tower, Chinatown, Lombard Street, Alcatraz and the California sea lions. It is the only carousel in the country that has artistic renderings of its home city. Eighteen hundred twinkling lights illuminate this carousel, which features classic moving horses, rocking chariots, spinning tubs and swings.

If you’re a chocolate person, this is the place for you. The famous brand offers all sorts of tasty treats in the square. It is also a great place for families children. There are 2 Ghirardelli chocolate shops . there where you can sample their delicious array of sundaes, indulge in the variety of tempting desserts and get some tasty souvenirs for your family at home.

Would you like to learn about San Francisco, its life and history? Visit the Maritime Museum for interesting exhibits and artifacts. Experience the historically stunning Liberty Ship, the SS Jeremiah O’Brien, docked right next to the Pampanito, an original WWII submarine.

The SS Jeremiah O’Brien is one of two remaining fully functional Liberty ships of the 2,710 built and launched during World War II. The O’Brien has the distinction of being the last unaltered Liberty ship and remains historically accurate.

The USS Pampanito(SS-383) is a meticulously restored World War II diesel-electric powered submarine. Located in the heart of Fisherman’s Wharf, Pampanito is both a museum and a memorial to those who served in the “silent service.” Built in 1943, Pampanito made six patrols in the Pacific during which she sank six enemy ships and damaged four.

In San Francisco you will always find a few iconic places and foods to try. If you travel to try different food, like me, you should try the famous San Francisco Clam Chowder and here are a couple of places to try it in the Fisherman’s Wharf!

Boudin At the Wharf

The Boudin Bakery is the home of sourdough bread bowls.  It was established in 1849 by Isidore Boudin, son of a family of master bakers from Burgundy, France. Before you order, you can watch the bakers craft batches of bread by hand through the observation window. While you are enjoying your meal you will notice that the bread is delivered right over the heads of the customers in baskets. After you had you lunch, you can go on a factory tour to really see the whole process of preparing their famous sourdough bread. When in Boudin Bakery, you will find a variety of soups in bread bowls, sandwiches and even sourdough pizzas! But I recommend the clam chowder as it’s the all-time favorite of the Fisherman’s Wharf. And it’s just about $8.

If you keep going from Pier 39 past the Boudin Bakery, you will arrive at the Wharf market. Here you will find even more sea-food: crab and lobster sandwiches, shrimp po-boys, and, of course, clam chowder in sourdough bowls. This clam chowder is a little more expensive and will be about $10 or more. But, you will also get the experience of shopping in the street market and eating your food on the go. Just look out for the seagulls stealing your food!

Traveler’s Tip: Come to the Wharf for an afternoon Happy Hour. From about 3 to 6 pm, you are in for some really good and inexpensive beers, sangrias and appetizers. Some people advertise all-day happy hour, but I would shop around and find the place that looks best to you and stay for a little while. Enjoy some sun, a glass of wine and people-watch.