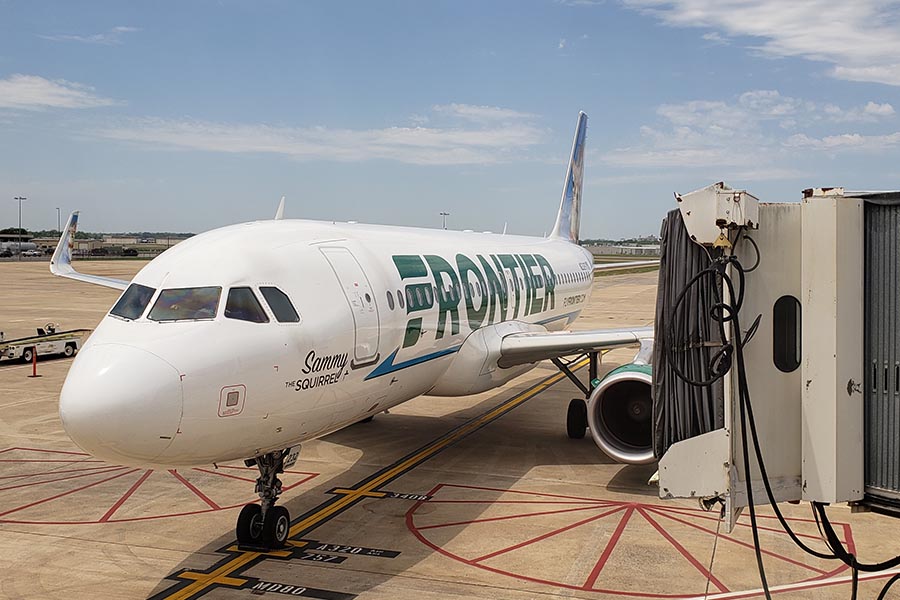 With just 65 planes Frontier is one of the smaller airlines to choose from, but it’s not a bad thing. Because of their smaller size they have to price competitively. Frontier has flights to most of the major destinations in the United States and several other key locations in Mexico. In this Frontier Airlines review I share how we flew to San Francisco with Frontier for just $180 per person round trip.

How Do Frontier Airlines Work

As a budget airline there is a tradeoff for these minimal prices. To keep prices low Frontier doesn’t have the high-end amenities that expensive airlines have. There won’t be a TV or fancy meals, but with the amount you save on the ticket, treating yourself before or after the flight will easily make it worthwhile. On flights over 200 miles there are still snacks and drinks offered although they don’t count as a full meal. Just grab some food before or after the flight at the airport or take snacks with you! Keep in mind, since Frontier is typically located in more remote sections of an airport there may not be much food near their terminals.

Frontier Airlines does not offer much entertainment. Fortunately, we live in the age of portable technology. A mobile game or e-book can easily keep you occupied for the typically maximum 4 hour flights that Frontier offers.

If you are a frequent flier between major cities you may want to consider Frontiers subscription service, Discount Den. This service is only $50 per year and can save you on average, $5-15 per flight. With their flight costs already being extraordinarily low, it can add up quickly. When traveling you can’t always pick the most ideal times to save on tickets. This is especially true for those of use working 8-5 on the weekdays. It is in situations like this that having Discount Den particularly shines.

If you choose to fly Frontier, you should plan carefully for your baggage. If you want to save the most money on your flight, your baggage is one of the top factors to consider when flying Frontier Airlines. They have a stricter policy on baggage than most.
The first thing to keep in mind is the size and weight of the carry on. The first carry on item is free but, it is going to be important that you follow these guidelines because Frontier won’t be lenient and will charge $60 if you don’t adhere. The carry-on item size is smaller than other airlines, so read the guidelines carefully.

What to Watch Out For with Frontier

Now, like most airlines, to maximize your savings it is best to book midweek or other off times. Here is the deal with Frontier: some airports have flights twice a week. If you have a connection and you miss your flight, you will not be able to get another flight for a few days. If you choose to fly a different airline, Frontier will not be able to pay for you and will only reimburse you for your missed flight. When you book your tickets, make sure you have a few hours before your connection. It’s better to spend a few extra hours at the airport than a few days in case of delay.

How to Get the Best Frontier Seats

Frontier urges you to purchase a seat selection when you are booking so that you can sit to your friends. However, if you book a ticket for 2, you will automatically be placed together on the airplane. There is no need to pay extra.

We were able to find tickets as low as $90 one way when we searched for Frontier flights to San Francisco. The flight left at 2 p.m. and arrived in San Francisco at 11 p.m. There were no other options for other times, but if you get a Lyft to from the airport, you will be in your hotel way before midnight. We got one checked bag for two people and it was just an extra $30 one way. If we took an extra carry-on, it would be $35 and we wouldn’t be able to fit all of our things in one bag for a 7 day trip.

The flight on the way back left at 1 a.m. from San Francisco and we were supposed to get home around 2 p.m. with a layover in Denver. The first flight was delayed by 3 hours, which made several people on the plane late for their next flight. Since we had a long layover, we had time to have breakfast at the airport and get to our next flight on time.

We chose to check in at the airport. The process went very smoothly. The check-in starts 2 hours before takeoff and closes 20 minutes before takeoff.

For general questions or to make a reservations you can call their office at the following number: 801-401-9000.

So, is Frontier Airlines Really Worth It?

All things considered, Frontier certainly isn’t a luxury airline. You won’t find all the convenient amenities that other flights offer or entertainment provided. However, if you follow all of the tips provided in this article, Frontier helps you save on travel. And with food easily accessible in the terminals, entertainment at your fingertips with smartphones, Frontier is clearly the way to save.

Where Does Frontier Fly

Tell me: Have you used Frontier Airlines? How was your experience?