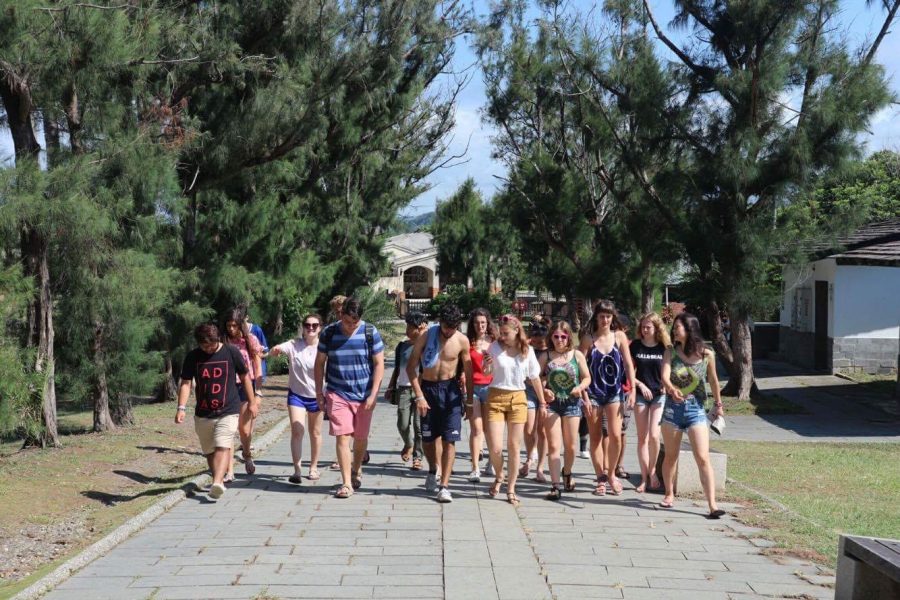 Daiki was born in Japan but grew up in America. He speaks two languages fluently (Japanese and English), plus Mandarin Chinese and Spanish, and currently studying Portuguese. He is a constant traveler and has never stayed in one city for more than 4 years in a row. He is sharing his experience and tips with fellow travelers about his study in Taiwan.

What do you find the most challenging about living abroad?

Daiki: Studying abroad in Taiwan, where the language is so different from any other was very difficult. For example, Romantic and Germanic languages are somewhat similar and it is possible to interpret the meaning. So learning the language was definitely hard. Another was the cultural differences. I thought that because I have lived in Japan and being an Asian country, it wouldn’t be so bad. Well, that was completely wrong. It was a culture that was very interesting yet difficult to adapt to quickly.

What do you find the most rewarding about your time abroad?

Daiki: Like a week after I came back, I took some time to reflect and think about what I gained from studying abroad. No doubt language was a big part. To be able to (somewhat) speak Chinese in this age brings lots of advantages. The experience was another. Studying abroad for a year is such a unique experience and I don’t regret anything from it. Especially with such a beautiful and unique country like Taiwan, made it all the better. Lastly, the friends I made is what I cherish the most. To realize that I have friends all over the world is so crazy and hard to wrap my mind around. I know that if I ever have the chance to go visit them (which I hopefully do someday) I’ll always have a home to stay.

What advice would you give someone before they go abroad for the first time?

Daiki: So I have this mantra that I try to live by, from one of my favorite people on Earth, Casey Neistat. It’s “do what you can’t”. I take is like “do everything” or “say yes to everything”. I think this is perfect for someone who is going abroad. No matter how secluded and introverted they were, during studying abroad, they should try everything and say yes to everything. It’s only a year and who knows when that opportunity arises again. It’s always better to do it then to not do it. During my time, I ate lots of weird stuff, tried new things and went out of my comfort zone, which made the year that much better.

How did this year abroad change you?

Daiki: My year abroad made me view the world from a different perspective. By living in a different country, I was able to see both the beauty and the negative sides, meet people who have different ideas and thoughts than I do, and how one country’s actions have effects on another (Taiwan used to be a part of Japan during WWII). Not only the country changed my views but also meeting friends from different countries did the same as well. Although we are the same age, we are so similar yet so different.

How do you deal with culture shock?

Daiki: To be honest, I didn’t experience a big culture shock when I arrived in Taiwan compared to others. I think it has to do with the fact that I have constantly moved throughout my life and lived in both Japan and America, two culturally different countries. But to solve it, I just walked down the street and explored the city. I thought if I put my self in a situation where I experience the different culture all at once, it would make the rest of my time easier to handle. And it did. I literally walked down the streets, went to the touristy places, and interacted with the people there. I asked those from Japan if they experienced culture shock and they said they didn’t as well. On the other hand, I did experience reverse culture shock when I came back to the US. Asia is so different from America that it was a lot to handle all at once.

How do you deal with language challenges if you had any? What advice would you give to someone who has?

Daiki: One of the best things about Taiwan, in my opinion, is that so many of the younger generation speaks English really well. So when I was first learning the language, I would ask my classmates around me, “hey, what does this mean?” or “how do you pronounce this?” and they would answer me with near perfect English. I also had the help of my English teacher at the school teaching me things from outside the textbook I was using. I also went to language classes outside of the one provided by Rotary to further progress my skills. To anyone struggling, I would tell them, just seek help. I know first hand that asking for help is difficult and feels like they are admitting that they “lost” but in these situations, it is so important to learn the language. If you know the language, you can communicate with people around you, which leads to many opportunities. I know a lot of people who didn’t put a lot of effort into learning the language and they didn’t have the greatest time studying abroad. On the other hand, those who really put in the effort to learn how to communicate, I feel that they had a great time.

How often did you speak with your friends and family back home?

Daiki: I would probably talk to my friends back home once every few days and my family even less, like once a month. Only when it is urgent and/or important. I wanted to be as independent as possible during the year. I thought it would make the experience more interesting.

Daiki: As most people who studied in Taiwan would say, one of the best things about that country is the food. It is cheap and delicious. The numerous night markets across Taipei makes for a great way to explore the city. On top of that, having a subway that connects the entire city makes travel really easy. On the other hand, having different cultural norms made Taiwan different. This is the same with any country, for example, having certain taboos and rules took some time to get used to.

What are you planning to do next? Will you go abroad in college?

Daiki: YES, I would love to study abroad during my time in university! I am thinking about during my junior year I would go. Not certain where but I am thinking about Portugal and Japan. Because I am studying Portuguese, it would make sense to go and polish my skills and learn a different culture. Not to mention that I would get to live in Europe. My parents want me to go to Japan because I really never had the opportunity to go to a real Japanese school since second grade. To go to Japan and go to a university there and experience it first hand would be really cool to do. On top of that, I get to go back to Japan, which is always a plus. Honestly, I would like to go everywhere and anywhere.

What are some tips you would give to someone who is going to study in Taiwan?

Daiki: a. Learn the language- As I stated before, learning the language opens so many doors during studying abroad. Really important to be able to communicate with the natives.
b. Explore the city- Whether it is a metropolis like Taipei and Kaohsiung, or the suburbs around it, just go out and explore. There are bound to be unique and fun things around that you have never seen before. Get to know the city and what it has to offer.
c. Take in the culture- Especially with Taiwan, which has a beautiful culture, learn as much as possible and take the experiences to heart.
d. Be prepared to be uncomfortable- I’ll be the first to admit it, (some) Taiwanese people and culture are weird. But its weird only at the beginning. You’ll get used to it as you go on. But that first time you see something that really shocks you needs some getting used to.
e. Go out of your comfort zone- Say “yes” to everything. Taiwan has lots of unique things that can’t be experienced anywhere else. Try it before you lose the opportunity to. Eat new things. Try something different.
f. Make countless memories- Go places with your exchange friends and go to those hidden places with your classmates. Going somewhere new will 100% make great memories.

How to Afford Study Abroad?

If you are going to study in Taiwan soon, I hope you find these tips useful and make the  most of this incredible time!